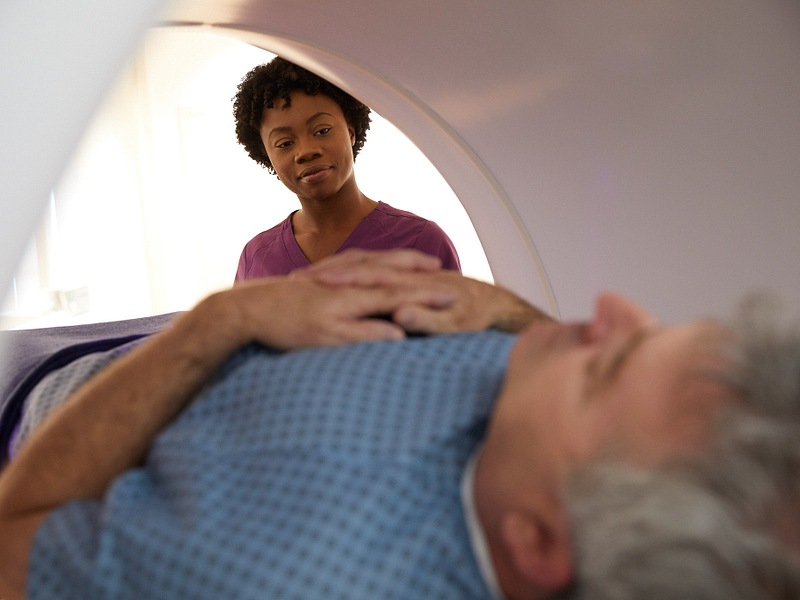 Most, if not all, radiation therapists who have practiced for a considerable length of time would agree with Fiona Gordon, Clinical Lead Radiation Therapist at the Icon Cancer Centre, Sydney, Australia, that the profession has changed significantly. Though the role of a radiation therapist varies among institutions and across the globe, change is occurring everywhere.

“My role as a radiation therapist has changed dramatically over the years, as the techniques that we use to treat cancer have evolved, from conformal treatment to IMRT to VMAT and the way that we can conform the beam to size and shape of the target. Comparing my role now to when I started—we didn’t even have MLCs then—is apples to oranges,” says Gordon.

As Gordon suggests, change in the role of radiation therapists (RTTs) has been propelled by advances in technology, which have demanded more knowledge, judgment, and decision-making from therapists at the point of care. With the introduction of IMRT and IGRT, therapists became expert at analyzing kV radiographs and cone-beam CT images, knowing how to make setup adjustments, and contacting the physician when the patient positional alignment is outside the department-defined tolerance.

Liselotte ten Asbroek-Zwolsman, Senior RTT at Medisch Spectrum Twente (MST) in the Netherlands, agrees on the impact of technology: “The computer does more work for us. It makes our life easier, but it also gives us more responsibilities.”

Today, systems enabling on-couch adaptive therapy are fueling further evolution of the profession. For example, Varian’s Ethos™ therapy system offers radiation oncologists a set of powerful yet simple tools for adapting treatments according to daily changes in patient anatomy. They can see changes with diagnostic clarity and adapt the treatment plan within minutes. The Ethos therapy system uses artificial intelligence to create contours that can be adjusted and to generate adapted plans while a patient is on the treatment couch. It is highly efficient, presenting information for making decisions in a structured, contextually logical, and easy-to-understand manner. However, adaptive therapy can require more attention from radiation oncologists than standard IMRT or IGRT. As radiation oncology departments around the world navigate scheduling patients for adaptive therapy, many are adapting responsibilities at the point of patient care and training radiation therapists to support the process in ways that were not part of the picture in the past. 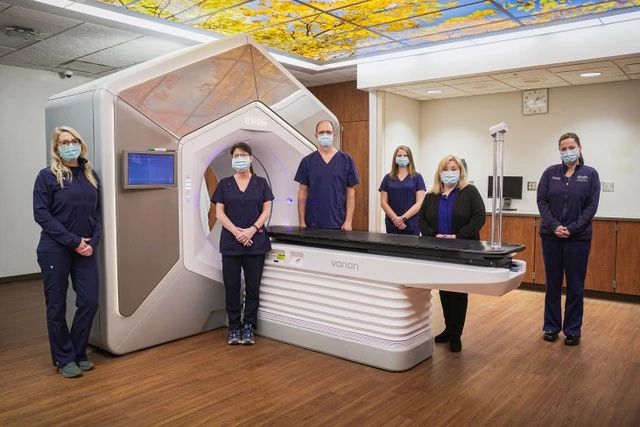 When the Henry Ford Health System, Michigan, acquired its first Ethos system at Henry Ford Allegiance in Jackson, radiation therapists recognized the challenge and the opportunity. “We had questions,” recalls Deborah Dusseau, Manager, Radiation Oncology. “What would be the role of the therapist in adaptive therapy? Would there need to be a dosimetrist in the control room all day? Or a physicist?”

At first, a physician was present for every fraction to review and adjust AI generated contours and choose the plan to deliver, which impacted the clinic schedule. In this new environment, radiation therapists stepped up to support clinical operations. “It was our idea to learn contouring,” says Susan Finch, Lead RTT.  She and four other radiation therapists on staff participated in a contouring rotation, passing with flying colors.

“The physics department provided many challenging test cases,” says Dusseau. “The therapists learned best practice standards for contouring, our physicians reviewed the results and provided continuous feedback, then signed off on competency. Special thanks go to doctors Annette Kretzler, Sean Vance, and Ian Gallagher for their time and help with this process.”

Having earned the confidence of the physicians, the radiation therapists now have accountability for the adaptive therapy delivery process with oversight by the radiation oncologists in a process that engages the therapy team and allows the physicians to focus their time on the review and approval process.

“The therapists are responsible for the initial contouring of structures following detailed physician guidelines, coordinating with Physics, and getting the final check and approval from the physician,” Dusseau explains.  This process engages the therapy team and allows the physicians to focus their time on the review and approval process.

“The position of radiation therapist has evolved to take on a lot more responsibility,” says Brian Goodwin, Senior RTT. “You can't have your entire department out on the treatment machine all day. Obviously, we had to evolve,” adds Amber Bengel, Senior RTT. 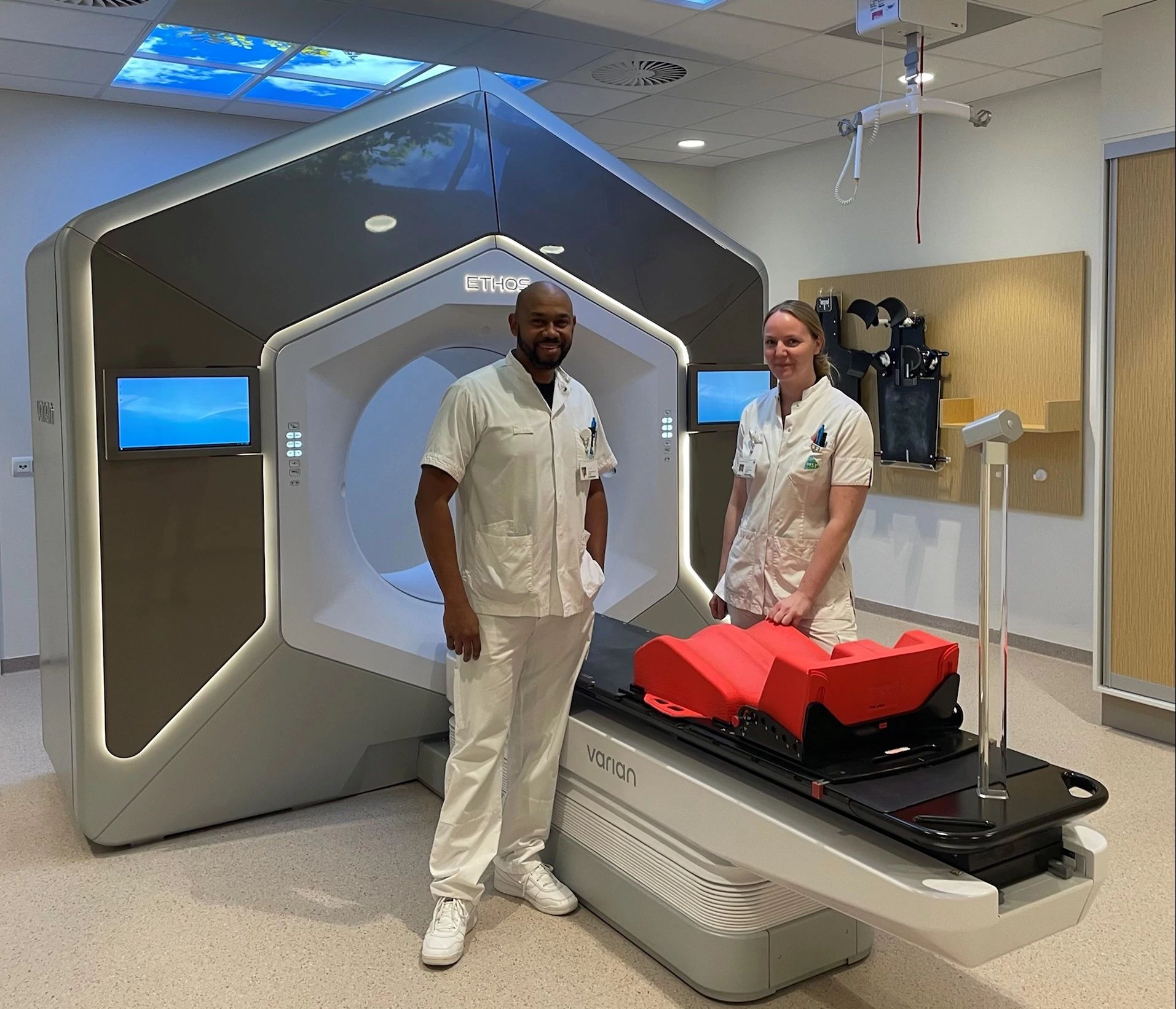 When Medisch Spectrum Twente (MST) hospital in the Netherlands began treating prostate patients with Ethos adaptive therapy, they had a goal: specially trained radiation therapists would deliver the treatments on their own, without a physician at their shoulder. “Because physicians could be available to us for only one hour, we would otherwise be limited to treating three patients a day. We had to work something out,” says Dennis Daal, Senior RTT.

Many radiation therapists in the Netherlands plan treatments as well as deliver them, so they are well positioned for taking a greater role in daily adaptive therapy. Advanced radiation therapists at MST contour the “influencer” organs for the adaptive treatment; then the physician contours the planning target volume and clinical target volume. “Then at the couch, we are the ones checking, correcting, and approving the influencers,” explains Liselotte ten Asbroek-Zwolsman.

RTTs designated as adaptive specialists are trained in contouring and anatomy by radiation oncologists and signed off as proficient. “The doctors know that we can perform these tasks on the Ethos system, with the new AI technology,” says Daal. As a result, the MST team has been able to increase the number of adaptive patients they can treat from 3 to 15 per day.

A vision for the future comes into focus

Radiation therapists in Australia generally have a broader portfolio of responsibilities than in many other parts of the world. They plan as well as deliver treatments. “RTTs, medical physicists, and oncologists are intrinsically linked here. “From initial consultation to the beginning of treatment there is constant interaction and collaboration around every patient,” describes Gordon. “Even more so with Ethos adaptive therapy patients.”

At present, radiation oncologists attend each fraction for at least the first week of adaptive treatment to work with the RTTs, oversee contouring, and select the plan for the day. During that time, they compile for the RTTs patient-specific guidelines for achieving their intent for the patient.  “After the first week, for the less complex cases, the RTTs drive the contouring, with some back-and-forth discussion with the physician.

That is the process at the Icon Centre today. However, based on more than 20 years’ experience as an RTT, Gordon predicts the future of the RTT role. “As Ethos adaptive therapy becomes more mainstream, RTTs may come to specialize in adaptive therapy for specific parts of the body. For example, we already have RTTs who specialize in breast treatment and who delineate CTVs for the radiation oncologist. I think there is scope for such specialization as Ethos becomes more the norm.”

Regions and institutions define the radiation therapy role to meet the needs of patients and the requirements of their operations for efficiency. However, technology advancement in treatment techniques is providing fertile ground for radiation therapists to expand their skills and to raise their profile in integrated care teams. Through innovation in AI, Ethos is enabling RTTs to take a more responsible role in the adaptive therapy process and in collaborative decision making. It is a new impetus for change in the RTT profession, but it certainly will not be the last.

The information captured herein represents the genuine experience of the attributed individuals and may not necessarily represent the views of Varian or the above-referenced institution. Individuals were not compensated for their participation. Radiation treatment may not be appropriate for all cancers. Individual results may vary. For more information, please see Important Safety Information.