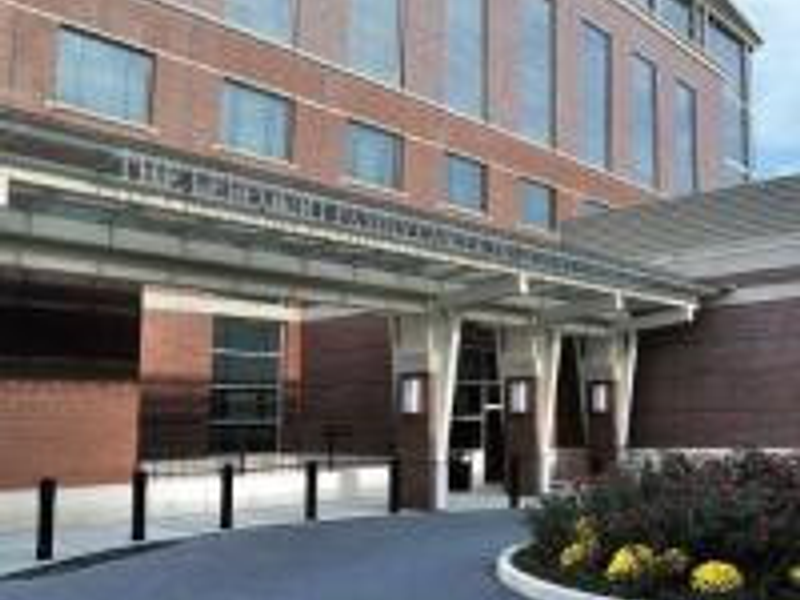 Englewood Hospital and Medical Center, a medium-sized community center in the New York metropolitan area, is treating small tumors in the lung with SBRT. That in itself isn’t news, but how they are delivering the treatments is of interest. At Englewood, interdepartmental teams of radiation oncologists and pulmonologists are collaborating to treat patients using implanted fiducial markers. These fiducial markers—along with triggered imaging and auto beam hold – are used to control when the treatment beam is on. Two things are particularly noteworthy. First, the use of triggered imaging and auto beam hold, which were pioneered with prostate treatments, can be applied as successfully for other body sites—in this case, the lung. Second, nimble community centers, where interdepartmental collaboration is often easier, are able to deliver the same advanced treatment as the largest academic centers.  “We are an example of how even a small center can do SBRT for complex cases,” says David Dubin, MD, Chair of Radiation Oncology.

Electromagnetic navigation bronchoscopy (ENB) is used to implant the fiducial markers that act as surrogates for tumor motion and deformation. ENB provides 3D mapping of the bronchial tree and guides bronchoscopic placement with GPS-like navigation. ENB is the preferred method at Englewood for biopsy and marker placement whenever possible, as ENB carries a much lower risk of pneumothorax than percutaneous approaches. “We think every lung patient undergoing SBRT should have implanted markers if they can,” says Killol Patel, MD Pulmonary & Critical Care.  Patients undergo a biopsy and marker implantation in a single procedure.

Respiratory gating provides a continuous visual trace of the patient’s breathing. During treatment planning, Englewood contours the implanted markers on the respiratory phases they want to treat just as they do the target volume and other structures. Setting and verifying the gating window prior to each treatment is aided by the use of fluoroscopy, which superimposes the contoured marker volumes onto the live images.  Everything comes together in a single, integrated view. “What we like about the TrueBeam® system with advanced imaging is the integrated display,” says Dubin. The breathing trace from the respiratory gating system, the planned marker volumes, and the live markers on fluoroscopy are all present on one screen. As the patient’s respiration enters the gating window and the treatment beam is enabled, the contours turn from green to yellow on the display. (See Figure 1.) “You have confidence that the treatment delivered matches the plan because you can correlate external surrogates with internal targets all on the same screen,” adds Dubin. 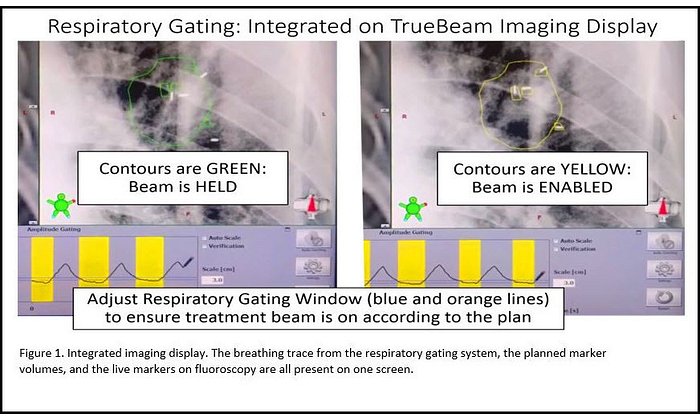 Triggered imaging is a capability of the TrueBeam delivery system that acquires single kV images during treatment delivery.  Image acquisition can be triggered by elapsed time, MU delivered, gantry angle, or breathing motion of the patient. For gated lung SBRT, Englewood sets the image acquisition for “Continuous at Beam On,” which takes a kV image every time the patient’s breathing enters the respiratory gating window during the treatment delivery.  “You know what the motion is supposed to be from the simulation study. You verified that motion and set the respiratory gating window with fluoroscopy.  Triggered imaging allows you to verify that motion is maintained throughout the treatment delivery,” says Michael Speiser, PhD, chief medical physicist. 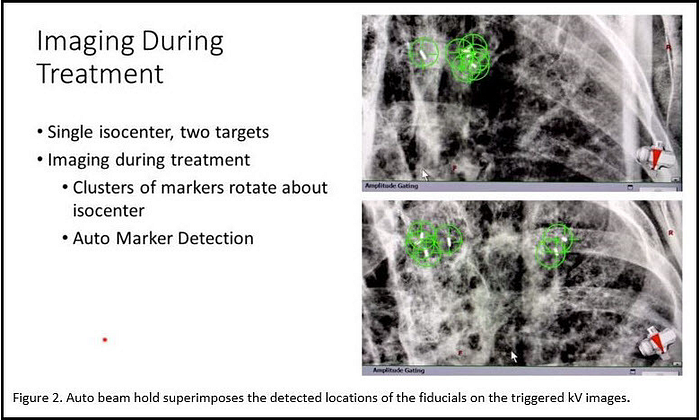 In addition to confidence-boosting technology, another factor that helps Englewood take on such complex SBRT cases is close interdepartmental collaboration. In addition to two radiation oncologists, Englewood has 15 pulmonologists. “The input of pulmonologists is useful throughout treatment planning,” says Patel. Of course, pulmonologists implant the fiducial markers, if indicated, usually at the time of the diagnostic bronchoscopy. However, their contribution doesn’t end there. They also help identify candidates for the technique and they assist with the contouring of the target volumes.  Smaller hospitals may have fewer personnel, but Englewood offsets that with a nimble, collaborative team.

Dubin points to one case that exemplifies the confidence in treating small moving targets that triggered imaging with Auto Beam Hold confers.

An 82-year-old woman with emphysema had two nodules in the upper right lobe that were determined to be squamous cell carcinoma. Because of poor lung function, she wasn’t a candidate for surgery. And because the insurance company declined to cover two separate SBRT procedures, the decision was made to treat both tumors at the same time. “The treatment we planned had a single isocenter for the two targets. It was intensity modulated and amplitude gated, with auto marker detection and auto beam hold,” Dubin explains.

“We would never have attempted to do this without implanted markers to provide confidence that the patient was behaving as we needed in simulation, on treatment table for set up and throughout the treatment.” This technique provided the assurance that we were getting the end-to-end targeting required of such a complex plan.  The added confidence comes without adding significantly to the treatment time. Total treatment time, including image guidance and gated treatment delivery, typically takes approximately 17 minutes.

With technology and teamwork, accurate SBRT is well within the capabilities of community centers. Democratizing SBRT is crucial for attaining more victories over lung cancer, the third most common cancer and the leading cause of cancer death in the United States. “Imaging with markers helps us to better position a moving target, set the gating window to match the plan and verify the position and gating throughout the treatment,” emphasizes Dubin. “Ultimately, with increased confidence in targeting, clinicians may become more comfortable at reducing treatment margin to spare more normal tissue, which could mean fewer side effects and better quality of life for patients.”

To find out more, see Dubin, Patel, and Speiser present their process in greater detail in the webinar, Integrating Navigation, Markers, and Advanced Imaging for Lung SBRT - Best Practices from a Community Cancer Center on myvarian.com.

Note: The quotes contained herein are the genuine experience of the attributed individuals. No compensation was provided for their content. Individual results may vary. 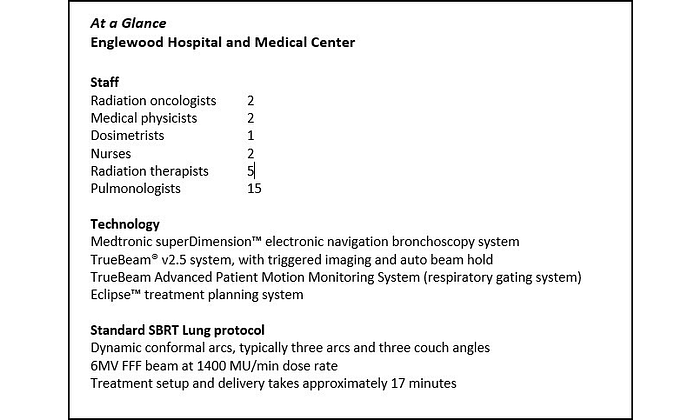