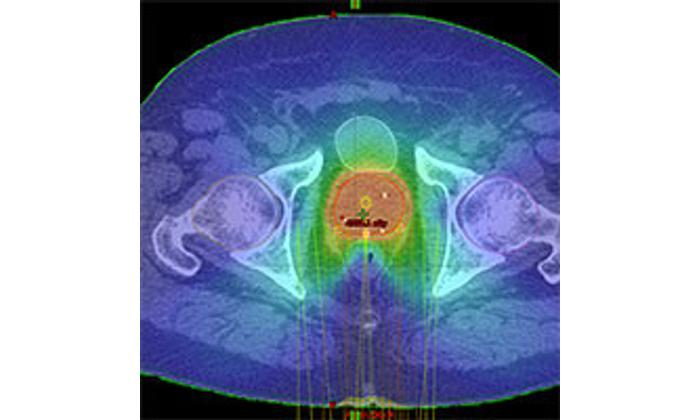 Using the ProBeam® Proton Therapy System and the current release of Eclipse™ (13.7) treatment planning software, I had the honor of achieving the highest scoring proton plan in the 2016 American Association of Medical Dosimetrists (AAMD)/Radiosurgery Society (RSS) plan study. 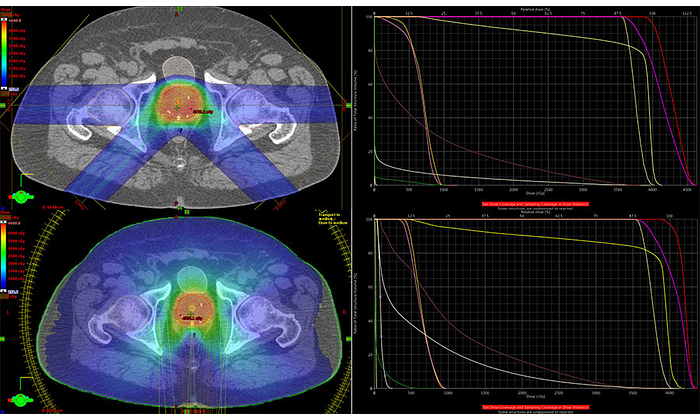 The unique capabilities of the ProBeam system and Eclipse treatment planning software allowed me to create an improved IMPT plan. The Eclipse software has a new inverse planning optimizer that features robust optimization and multi-field optimization. The ProBeam system offers an extremely small and precise spot size; a full 360-degree gantry rotation (available without moving the patient and re-imaging); and a single gantry dedicated beam line. These features enable -- for the first time -- the practical use of treatment plans with a larger number of gantry positions without patient re-positioning, allowing clinicians to double the number of treatment fields without compromising efficiency.

The 2016 AAMD/RSS plan study provided an opportunity to put the advantages of combining protons with multiple beam angles and multi-field optimization to the test.

The study case was a hypofractionated prostate patient with a planning target volume (PTV) dose prescription of 36.25Gy to be treated in five fractions, with a simultaneous integrated boost to the prostate gland of 40Gy. Some challenging goals of the protocol/plan quality were metrics with a maximum dose of 10Gy to the skin and femurs.

Exploiting the Capabilities of Varian Technology

Most current proton plans for prostate cases use one or two opposed lateral beams, which significantly reduces the flexibility in dosing the target as well as greatly increases the dose to proximal normal structures when compared to plans that use four or five beams. While two overlapping beams reduce the proximal dose in half dose, four overlapping beams reduce it four-fold.

With the ProBeam system's ability to quickly deliver proton treatment plans with four to five beams, a plan with four fields was initially used. It included two traditional lateral beams accompanied by two posterior oblique beams (gantry at 135 and 225 degrees) aimed to miss both femoral heads and the rectum.

Initially, I also used the Eclipse 13.7 software's new inverse planning optimizer with robust optimization, which takes into account patient positioning and density uncertainty during optimization. This feature also enables the use of robust junctions which enforce a low dose gradient at the edges of the treatment field for multi-isocenter shifts, abutting treatment plans, or modalities – eliminating the possibility of severe over/under dose at the treatment field junctions.

Robust optimization allowed me to create a treatment plan that slightly "smears" the dose in the direction of each beam to greatly reduce the range uncertainty, which can cause large over- or under-doses in the target volume.

Eclipse's multi-field optimization function enabled the proton optimizer to put dose into parts of the target most directly in the path of each individual beam -- rather than deposit dose unnecessarily through critical structures -- and allowed other beams to cover the portion of the target the first beam had avoided to spare healthy tissue.

While initial results were promising, in fact robust optimization was not necessarily ideal in this plan study because the robustness of the plan was not being judged, just the quality of the dose distribution. Also, since robust plans are usually generated from a clinical target volume (CTV) and the plan study was based around a PTV-based optimization, the robust feature of the optimizer was discontinued for the rest of the plan study. 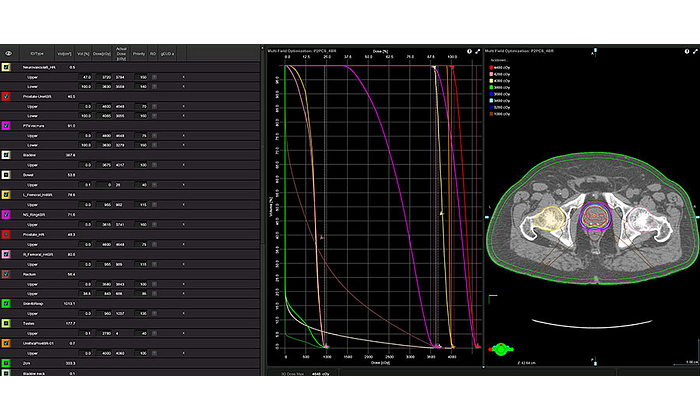 Results: Delivering on the Promise of IMPT

My initial plan, which included a single optimization and no dose-specific structures in the optimizer, resulted in a score of 144.5. This score was higher than the highest scoring helical or robotic plan submitted, and resulted in doses to the rectum that were much less than the ideal goals called for by the plan study protocol (goal for rectum: 40% @10Gy, four-field ProBeam 27% @10Gy).

In evaluating the protocol goals, I decided to improve the following areas in my plan:

To improve the IMPT plan, and to comply with the requirements of this study, a fifth posterior-anterior beam was added directly through the rectum, which increased the score but did not reach the ideal tolerance established in the protocol. I hypothesized that the fifth beam would aid in conformality and help spread out the entrance dose – because meeting the skin dose max of 10Gy with only four beams may have caused some small compromise in achievable target coverage/conformality. Since the goal of this study was to see how high a score was achievable, the five-field plan was submitted. However, from a clinical perspective, I would favor the lower scoring four-field plan with the much lower rectal dose and a simple optimization over the small increase in target conformality and minimum dose to the target afforded by the five-field plan with dose specific targets.

Click the images above to see the final dose colorwash of the submitted five field ProBeam plan for each target dose level with and without the dose-specific optimization structures viewable. 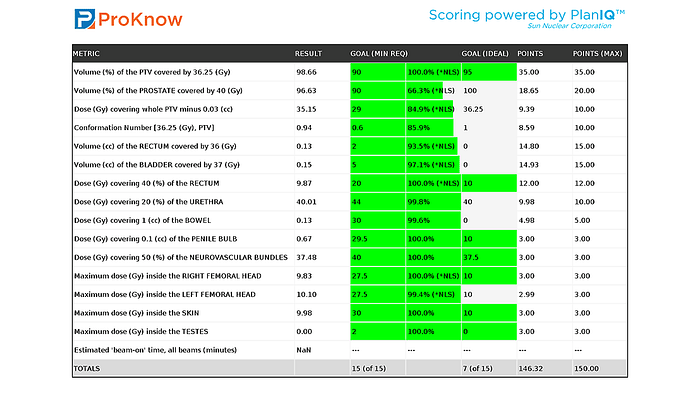 No photon plan can achieve zero dose to the testes, due to the scatter of photons.

Attempts to improve the plan and deliver on the full promise of IMPT were successful: The five field plan increased the score to 146.32, which was the highest scoring proton plan and the seventh highest scoring plan overall. This top score was made possible by combining ProBeam and Eclipse capabilities. That includes, the practical utilization of four or five-field delivery without needing to move/re-image the patient, multi-field optimization, and the ProBeam system's small spot size for precise dose delivery while utilizing the default spacing of those spots to keep the plan as clinically relevant as possible. After years of research, testing, and collaboration with customers regarding ProBeam and Eclipse development, it was satisfying to see the value of these efforts evidenced in a clinical plan study.