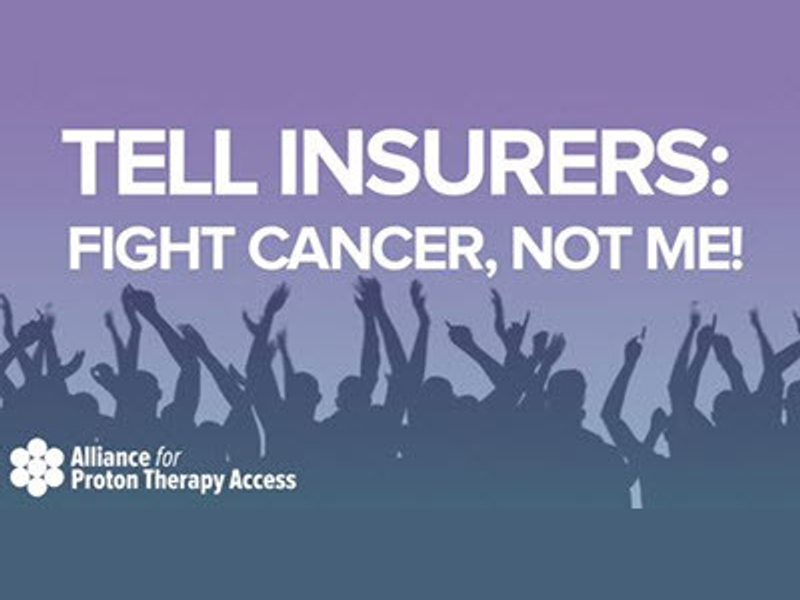 To kick off the campaign, we sent letters to dozens of health insurance companies and radiation oncology benefit management companies throughout the country asking them to clarify their decision processes and policies for proton therapy coverage. Our goal was to start an open dialogue with insurers to encourage the adoption of more consistent policies based on full knowledge of proton therapy and an understanding of what it can offer—the best quality of life for patients during and after treatment and, in some cases, a patient’s only hope for survival.

We are teaming up with industry partners including Varian, proton therapy centers and patient advocates all over the country and encouraging them to speak out about the need for clearer insurance policies for covering proton therapy. Tell Insurers: Fight Cancer, Not Me is based on the following, our core set of patients’ rights:

2. Transparency. We believe all cancer patients deserve a clear understanding of why proton therapy was approved or denied by their insurer.

3. Fairness. At the end of the day, the treating oncologist and experts in the field know best. We believe patients deserve health insurers that will base decisions off of experts’ recommendations.

The Alliance campaign is already garnering national media coverage. In a column in Forbes, economist Dr. Wayne Winegarden wrote about the obstacles and inconsistencies in proton therapy coverage determinations made by insurers. In an op-ed published in Fierce Healthcare, I outlined our campaign goals and stressed the Alliance’s willingness to work with insurers and our determination to elevate the patient’s voice to put an end to the unfair and inconsistent insurance policies that restrict patient access to proton therapy treatment.

The Alliance believes insurance companies owe each patient a timely, transparent and fair insurance process when faced with a cancer diagnosis. Fighting cancer is already enough of a burden—cancer patients do not need a complicated insurance process on top of that.

We aim to give patients, their friends and families, physicians, caregivers and others the tools to advocate for fair and timely access to proton therapy. Our campaign is an ongoing effort, so we encourage anyone interested in speaking out to join us in asking insurers to clarify their proton therapy approval processes.

Daniel E. Smith is the executive director of the Alliance for Proton Therapy Access and the former president of the American Cancer Society’s Cancer Action Network.