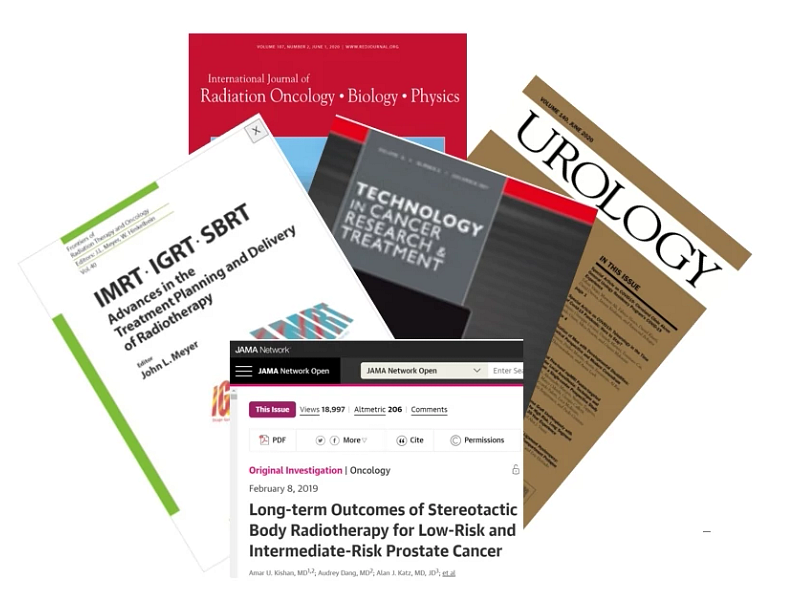 Fifteen years ago a handful of researchers began investigating stereotactic body radiation therapy (SBRT) for low- and medium-risk prostate cancer.  The basis for the research was a theoretical radiobiological advantage.1 This was followed by a handful of studies with short followup.2-6  (Interestingly, fifteen years earlier, without the benefit of modern imaging or treatment technology, a small pioneering study by Lloyd-Davies in Urology7 showed the convenience benefit of fewer fractions at higher doses in a long-term 22-year study with good clinical results). But in the mid 2000s, most were skeptical—convinced that the very high fractional doses would result in unacceptably high long-term GI (rectal) and GU (urinary) toxicities.  They had no data either way to assess SBRT’s long term effectiveness in the treatment of prostate cancer.

2019 Papers Summarize Decades of Data from Thousands of Cancer Patients
Now, some 15 years later, three papers8,9,10  published during 2019 have summarized decades of data from thousands of prostate cancer patients, providing convincing evidence that SBRT is highly effective in disease control with low long-term toxicity, equivalent to that of conventional RT treatments.  In short, the data is in and the news is great for patients!

When faced with a diagnosis of localized prostate cancer, patients can now comfortably add SBRT as a treatment option.  By adding SBRT to other options (surgery, traditional external beam radiation therapy, brachytherapy, focal ablative therapies & active surveillance), patients now have another choice that is both highly effective and efficient, with minimal short- and long-term toxicities.

Radiosurgery (SRS) and SBRT, also known as stereotactic ablative radiotherapy (SABR), are already being used to treat brain tumors and other brain disorders, lung cancer, liver cancer and in some clinics for prostate cancer treatment. Based on a 2018 review of multiple published studies, a panel of experts representing the American Society for Radiation Oncology, the American Society of Clinical Oncology, and the American Urological Association gave moderate hypofractionation an official thumbs up.11,12  Importantly, SBRT Prostate has made it into NCCN guidelines.14  The 2019 papers show that the adoption of prostate SBRT continues to grow.