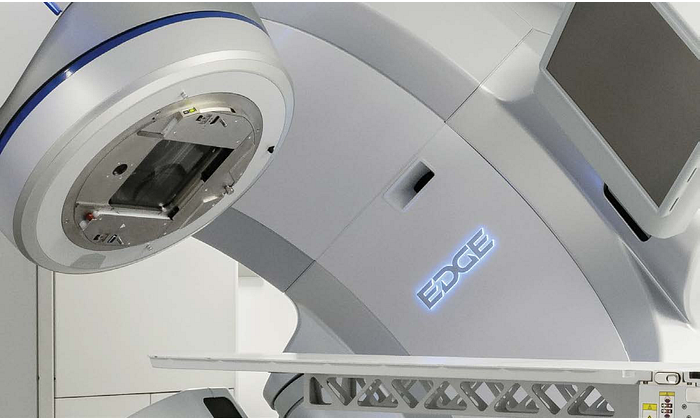 In February 2014, the first patients were treated on the Varian Edge™ radiosurgery system at the Champalimaud Centre for the Unknown (CCU) in Lisbon, Portugal. Since then, Edge systems worldwide have delivered more than 1,000 patient treatments and more than 12,000 fractions. Edge systems, designed for radiosurgical ablation, are installed in five countries1 in a range of clinical environments, including major research centers, large hospitals, and private radiation oncology clinics, where they are used routinely for delivering radiosurgery treatments for lesions, tumors, and conditions throughout the body.2 In these varied settings, the Edge, true to its name, is providing clinicians with an edge in accuracy and efficiency.

The Edge system represents an evolution in advanced radiosurgery. It is a turnkey solution for delivering full-body radiosurgery treatments. Integrating Varian’s most advanced medical linear accelerator with sophisticated tools for real-time imaging, tumor tracking, motion management, and patient positioning, Edge is designed to deliver highly conformal dose distributions rapidly and efficiently. The system’s mechanical specifications provide submillimeter accuracy as a functional capacity of the coordinated subsystems: gantry, collimator, and couch. Because of the speed and precision built into the Edge system, clinics may be able to treat more patients with noninvasive radiosurgery.

One center at the forefront of radiosurgical techniques is CCU in Lisbon, Portugal. The center opened its doors to patients in 2011, with a focus on translational research in oncology. In three years, the Centre has built a radiation therapy program that attracts patients from all over Europe and as far away as India. 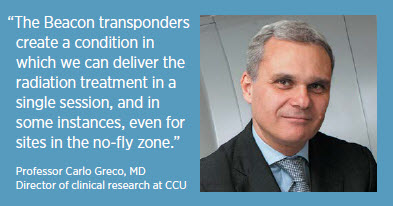 At present, CCU treats the majority of patients with hypofractionated radiotherapy and many with stereotactic image-guided techniques. “Every day we are treating a significant number of patients on the Edge system with a stereotactic approach, which is typically one to five sessions,” says Professor Carlo Greco, MD, director of clinical research at CCU.

Single-dose image-guided radiation therapy (IGRT) is one of Greco’s top research interests. He recently performed a preliminary analysis of results when managing oligometastatic disease by delivering a single fraction of 24 Gy and noted promising results. “We assessed the responses of 210 lesions in 95 patients using metabolic criteria from PET scans. Overall freedom from local relapse at three years is 85 percent. After three months, we saw actuarial LRFS of 95 percent, for lesions that displayed a decline in SUVmax of greater than 75 percent, compared to 79 percent for those with a decline of 75 percent or less. This suggests a potential role for early PET reassessment in outcome prediction. There is a growing body of literature on single-dose IGRT to support its technical feasibility.”

CCU is one of a few centers in Europe doing single-fraction radiation to the lung. Qualifying patients are treated on the Edge radiosurgery platform, using anchored electromagnetic Beacon® transponders in conjunction with the Calypso system for targeting and tracking tumor motion.3 “The Beacon transponders create a condition in which we can deliver the radiation treatment in a single session, and in some instances, even for sites in the no-fly zone,” says Greco, referring to centrally located lung tumors that can be difficult to treat because of the potential for severe toxic effects. “If we can do accurate conformal avoidance because we have a GPS-type system that tells us precisely where we are, we have shown that one can fly into the so-called no-fly zone with a single fraction,” says Greco.4

The geometric accuracy of the Edge has been confirmed at CCU. “With all the components combined in the system—the imaging, the beam isocenter, the MLC, the six-degrees-of freedom couch—we have measured our machine to a mechanical accuracy of approximately 0.4 millimeters,” says Greco.

The cornerstone of radiosurgery at Henry Ford Health System

Researchers at Henry Ford Health System were part of the team, along with CCU, that substantiated the accuracy of the Edge system. The Henry Ford Health System, based in Detroit, Michigan, has a wealth of experience in delivering stereotactic radiation treatment. Over approximately 15 years, Henry Ford has treated more than 4,500 patients with stereotactic radiation; more than a third have been spine radiosurgery cases. In addition, they have considerable experience in stereotactic body radiation therapy (SBRT) for tumors of the lung, pancreas, adrenal glands, and other sites that are not amenable to surgery or conventional radiation treatment. Today, the radiosurgery system that Henry Ford relies on most for stereotactic procedures is the Edge. 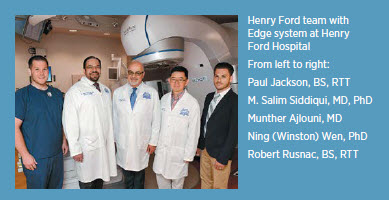 To illustrate the expanded applications for SBRT and the specific advantages of the Edge system, M. Salim Siddiqui, MD, Ph.D., director of the Stereotactic Radiation Program at Henry Ford Health System, shares the case of a 56-year-old man with a recurrence of hepatocellular cancer. Following a liver transplant in 2009, he returned in 2013 with a soft tissue mass, 3 cm by 3 cm, nestled in the duodenal bulb, between his small bowel, stomach, colon, and liver. As the tumor continued to grow, it threatened to obstruct the small bowel. His medical status warranted treatment beyond supportive care, but his options were limited. The proximity of the tumor to multiple critical structures in the abdomen made surgery, as well as local regional therapies, such as chemoembolization or radiofrequency ablation, too risky. Furthermore, the patient was not able to tolerate chemotherapy in effective doses.

“The tumor board asked if there was anything we could offer him from the radiosurgery perspective to deal with this localized problem,” says Siddiqui. “Studies have shown that hypofractionated stereotactic radiation treatments can be used for local control of a liver tumor mass. It’s not a curative option like a transplant or a partial hepatectomy, but it may be a very reasonable option for an inoperable local recurrence.” The challenge, in this case, was the location of the tumor abutting critical structures with low tolerance to radiation, such as the duodenum with a maximum dose point of 32 Gy.

This patient was treated on the Edge system because of its tumor tracking and beam-hold capabilities, precise beam, and high dose rate. “We came up with a five-fraction, eightbeam intensity modulated radiosurgery plan, using the 6X flattening filter-free beam. We placed fiducials in the soft tissue mass to trigger the beam on and off, and turned up the dose rate to treat this gentleman using a stereotactic approach—and give him the best local ablative therapy for his case,” explains Siddiqui. “The clinical objectives of the treatment were met. We were at or below tolerance doses for all critical structures and the alpha-fetoprotein marker used for assessing tumor response immediately declined significantly, and continued to go down two months post-treatment,” reports Siddiqui.

Henry Ford relies on the precision of the Edge system for most of its stereotactic procedures. “The Edge has integrated many of the planning as well as radiation delivery solutions that we require to be able to give very high doses precisely in stereotactic treatments,” concludes Siddiqui.

Another clinician who envisions an expanding role for noninvasive radiosurgery is John Stevenson, MD, medical director of radiation oncology at Dignity Health Cancer Institute of Greater Sacramento. When Dignity Health decided to bring previously contracted radiation oncology services in house, the center engaged Dr. Stevenson to develop and manage the program. The first delivery system installed in the newly opened center was a Varian Trilogy® system, followed the next year by the Edge. “Because of the distribution of patients we were seeing, we realized that stereotactic treatment seems to have a very bright future in radiation oncology, beyond intracranial applications. For example, with stereotactic body treatments for lung cancer, we’re seeing promising early studies that suggest local control rates can be achieved that rival those obtained with surgical resection. Now we’re starting to see applications of these stereotactic techniques to other treatment sites.” For the patient population requiring care, the institute needed a versatile solution for stereotactic therapy. “The system that seemed to be most innovative was the Edge, for many reasons. It offers a comprehensive stereotactic solution, both for intracranial work and for body work,” says Stevenson. “The combination of the 6DOF couch, the high-dose delivery rate, the 2.5 mm collimator leaves, and the advanced imaging package enables us to target and deliver stereotactic treatment with confidence.”

Clinicians at the Dignity Health Institute in Sacramento regularly use the Edge system for SBRT to the lung and for complex intracranial stereotactic radiosurgery (SRS) cases. “We’ve been able to target with relative ease and deliver highly conformal treatment to tumors of the cerebellum and meningiomas of very unusual shape,” says Stevenson, citing just a few examples. Stereotactic treatments account for about two-thirds of the cases treated on the Edge system at Dignity Health; other cases use Edge to deliver traditional radiotherapy with ease and precision.

Innovative Cancer Institute, founded and directed by Beatriz Amendola, MD, is a private radiation oncology clinic in South Florida for which the versatile Edge system was an easy decision and a perfect fit. Amendola’s substantial experience with intracranial and extracranial stereotactic radiosurgery includes using Gamma Knife,® CyberKnife,® and the Trilogy system. “When we opened our first center, we started using Trilogy with RapidArc® technology for lung and spine cases with very good results,” explains Amendola. “When we saw the Edge system presented at ASTRO, I told our physicists that we must have it. I knew it would be key for us to be able to do the best for our patients and deliver innovative treatments, including hypofractionated schemes.” 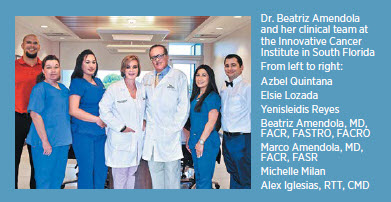 Amendola appreciates the flexibility of Edge. “The table motion with six degrees of freedom, the image guidance with real-time motion management and tumor tracking ability, and the higher spatial definition of the MLC allow us to attack tumors anywhere in the body,” she says. In addition, Amendola can create customized treatments that combine standard with hypofractionated approaches, delivered on the same system. In the seven months after going live with the Edge system in September 2014, Innovative Cancer Institute has performed more than 100 procedures, including lung, renal, and spinal cases.

In one interesting case, a woman who had been surgically treated previously for sarcoma of the uterus presented with severe pain and a grapefruit-sized mass invading the nerves at the sacrum. “First, we treated her in three fractions, delivering lower dose to the periphery and higher dose to the center of the tumor. After the three fractions, the tumor was reduced by 50 percent and the patient reported being pain-free. Then we converted her to conventionally fractionated therapy,” explains Amendola. Moreover, she adds, “The Edge system allows us to use SRS and SBRT for retreatment and palliative cases, as well as for curative cases, with higher confidence and improved efficiency.”

Thanks to the work of the clinicians at these and other treatment centers worldwide, the Edge radiosurgery system is opening up new noninvasive treatments for many patients with previously limited options.

1. As of March 2015, Edge systems have been commissioned in Italy, Portugal, Switzerland, the United Kingdom, and the United States.

2. The Edge platform is intended to provide stereotactic radiosurgery and precision radiotherapy for lesions, tumors, and conditions anywhere in the body where radiation treatment is indicated.

3. Anchored Beacon transponders for the lung area are CE marked, but are not available for sale in all markets. In the United States, they are investigational devices and limited by federal law to investigational use only.

3000th TrueBeam System Ships to India
Treating in the liver and reducing margins from 10 to 7 millimeters at Aarhus University Hospital
Real-time tumor tracking at The University of Kansas Cancer Center: “Like working in the light”