Improving Cancer Patients’ Access to Care Around the World | Varian 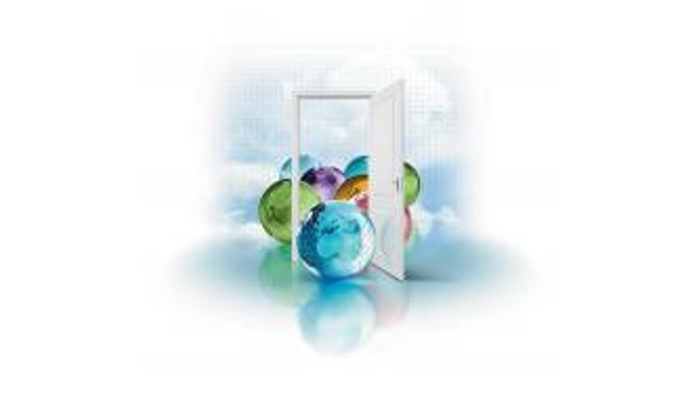 Improving Cancer Patients’ Access to Care Around the World

The People of Varian

Sometimes large companies can seem to be mystifying and impersonal. At Varian, we remain a small company at heart. This is the second of an occasional series of get-acquainted articles that highlight an aspect of Varian’s operations around the world, and then introduce some of the people who work behind the scenes.

As radiation oncology becomes increasingly precise and cancer centers worldwide can offer ever more advanced treatments for their patients, many parts of the world are still under-equipped, with too few machines to treat growing numbers of cancer patients. “But even when these developing regions are able to invest in installing new equipment to address this issue, they are often hindered by a lack of qualified staff to plan treatments and run the equipment,” says Michael Sandhu, vice president of Varian’s new global market development team. One of the ways in which Varian seeks to bridge the gap between skill levels and knowledge in well-equipped countries and those in developing nations is to provide a broad range of education services. One of the most ambitious of these is Access to Care, with successful projects underway in Vietnam and South Africa, and plans to introduce a program in Algeria this year. Programs in Brazil are on the drawing board. Managed by the global market development team, Access to Care programs are tailored to the specific circumstances of each region.

Access to Care was introduced in Vietnam earlier this year when 15 radiation therapy students from three leading cancer hospitals embarked on a “train-the-trainer” course. Through this program, the students—from the K Hospital in Hanoi, the Da Nang Cancer Hospital, and the Ho Chi Minh City Oncology Hospital—will become trainers themselves, providing training to others at their centers. In Vietnam, Access to Care training takes place in a training room on the Hanoi premises of Varian’s local distributor, Schmidt Vietnam, which is equipped with six treatment-planning workstations. Future trainees in Vietnam will enter an internship at one of three participating hospitals. Varian has developed a curriculum for the internship that includes practical work interspersed with training sessions in the Hanoi training room.

Following the success of this initiative for radiation therapists, Varian is developing Access to Care training programs for medical physicists and radiation oncologists in Vietnam. “We actively look at government plans in developing countries for addressing cancer and making radiotherapy more accessible, and prioritize our activities accordingly,” says Sandhu. “There are many other countries that could benefit from Access to Care, and we will look to broaden the program further over the next few years as these countries start to invest in radiation treatment.” 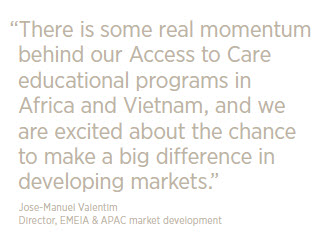 The Access to Care program in South Africa differs slightly from the one in Vietnam. “Whereas you’re effectively starting from ground zero in Vietnam and providing training in how to be therapists and physicists, in South Africa the students are already working in a clinical setting,” says Jose-Manuel Valentim, part of the new market development team. “In South Africa, we are focusing more on treatment techniques, particularly moving from cobalt-based 2D treatments to 3D conformal treatments.”

Varian has three clinical partners in South Africa to help run its Access to Care program. The training is held at Groote Schuur Hospital in Cape Town, which is equipped with a virtual linear accelerator and four workstations. A separate software lab equipped with six workstations is available for students to practice contouring and planning. University of Cape Town and Cape Peninsula University of Technology also partner with Varian in the program, providing certification for students who successfully complete the program. Varian is running two courses a year in South Africa, attended by 15 to 20 people from three to four participating hospitals. The hospital’s network is linked to Varian’s virtual education environment hosted in its European headquarters in Cham, Switzerland, and students can access the online training program to complement their practical training.

The next milestone will be the introduction of French language training courses in Algeria. Varian is working directly with the country’s Ministry of Health and with U.S. radiation oncologists to develop two Access to Care programs for therapists and medical physicists in the country. There are also plans to open a school to cover modalities like stereotactic radiosurgery (SRS) and stereotactic ablative body radiotherapy (SABR) that is being developed in partnership with Professor Toufik Djemil, an Algerian who is currently the head physicist at Cleveland Clinic in the United States. The training room at Varian’s Algeria facility will be equipped with a full suite of equipment and will also be linked to the virtual education environment in Cham. “There is some real momentum behind our Access to Care educational programs in Africa and Vietnam, and we are excited about the chance to make a big difference in developing markets,” says Sandhu.

Access to Care is managed by the Oncology Systems market development team. Michael Sandhu is head of the team, which also includes Jose-Manuel Valentim plus Access to Care program manager Stefan Berz and analyst Nicole Estermann.

Michael Sandhu came to Varian in 1989 from ABB, a multinational corporation headquartered in Zurich, Switzerland, operating mainly in robotics and the power and automation technology industries. Initially the sales manager for the United Kingdom and Ireland, he soon assumed responsibility for other European countries. After serving as public/private partnership (PPP) director for Europe, the Middle East, India, and Africa (EMEIA), he then headed up Oncology Systems sales and marketing for EMEIA before assuming responsibility for the Asia-Pacific region as well. Last year, he was appointed to his current role heading the newly formed market development team located in Cham, Switzerland. When not working, Sandhu spends time with his family and keeps a close eye on the progress of his beloved Leeds United soccer team back in the United Kingdom. He received a BSc. (Hons) Medical Sciences from the University of Bradford. The market development team’s challenge is to explore and cultivate new markets in Africa, Asia, and Latin America, and Access to Care is a key tool in helping the team to meet this challenge. “Access to Care is an important program for what we want to achieve in the market development group,” says Sandhu. “It’s an entry point into safe and effective radiation therapy for these countries. In order to equip under-resourced countries with advanced cancer-fighting equipment, we need local people to be trained on how to use it. Varian runs short educational programs on how to use our equipment, but Access to Care is much broader than that. Through Access to Care we are helping to turn nurses into radiotherapists, physics graduates into medical physicists, and oncologists into radiation oncologists.”

German by birth, Stefan Berz coordinates the Access to Care program from Varian’s European headquarters in Cham, Switzerland. Berz came to Varian two years ago following nine years working in the pharmaceutical industry for Novo Nordisk, a Danish leader in diabetes care. He has a PhD in natural sciences from the Federal Institute of Technology in Zurich, Switzerland. Away from work, he enjoys a range of outdoor activities with his wife, from skiing and hiking to tennis and traveling. He is also a keen amateur cook. For Berz, Access to Care is an exciting way of running a scientific training program for developing countries. “It is product agnostic,” he says. “This is not about TrueBeam® or Eclipse.™ It’s introducing people to linear accelerators in general—what the technology is all about, how it works, what are the benefits. We’re able to work with partners to establish a trained workforce in countries, such as Vietnam, where that level of knowledge doesn’t exist widely, and that’s really gratifying.”

Having trained as a radiation therapist at the University of Lausanne in Switzerland, Jose-Manuel Valentim became very familiar with Varian’s products and software during his early career at the State Hospital of Fribourg in Switzerland, before specializing as a dosimetrist in France and the Netherlands. This familiarity led to Valentim joining the company in 2001 as an application specialist. During his final two years at Fribourg, he completed a postgraduate course in public health management. Within a few years, Valentim had progressed to manage the applications team, and he was then able to utilize his expertise in training and education when he became the EMEIA director of clinical education four years ago. In his new market development role, he is heavily involved in the Access to Care program, particularly in Africa. “Access to Care facilitates access to academic content that meets European/international standards,” he says. “It focuses on clinical techniques, safety, and quality assurance around radiotherapy treatments. We want our students to have a first-level program upon which to build something more solid over time. Vietnam, South Africa, and Algeria are only the start. There are many other countries that could benefit from Access to Care.” Portuguese by birth and speaking six languages, Valentim became a Swiss national five years ago. A father of two children, he unwinds by practicing yoga and cooking for his friends and partner. Valentim says he will always have a nice bottle of Prosecco on hand to welcome visitors.